Welcome to the latest Hunter Pence update.  In case you want to catch up....here are the previous updates:

Pence's numbers have improved somewhat over the last month especially in RBIs and Runs Scored.  I continue to believe that Pence would have been an asset to the Phillies this season.  I don't think they would have made the playoffs but they certainly would have more wins.  Although I don't think they will, the Phils should try to sign Pence if/when he becomes a free agent at the end of the season.

I've decided to include two photos for the Hunter Pence Photo of the Month.  The first picture is right after Hunter scored a run. 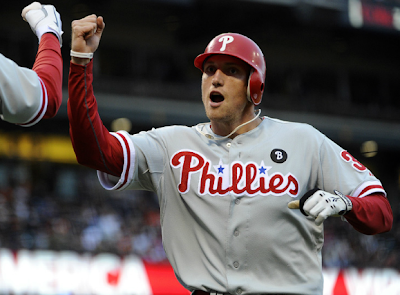 The second is a pic from the second game that Pence was a member of the Phils.  It was against the Pittsburgh Pirates and the Phils has just come back and won the game.  Many of the players (past and present) are celebrating the win with Pence...including Chase, Raul Ibanez and Shane Victorino.  This was also the game where Pence uttered his catch phrase "Let's Go Eat!".  I must say that I miss those fun days in 2011. 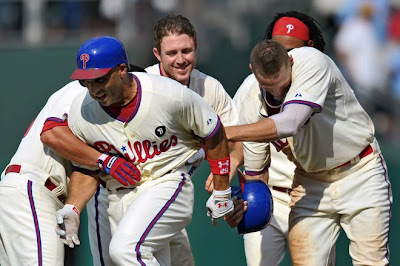