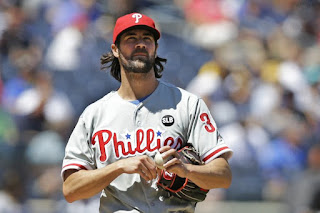 Former Phils starting pitcher Cole Hamels returned to Philadelphia this past weekend with the Chicago Cubs.  This is the first time that Hamels has been in Philly since he was traded to the Texas Rangers in 2015.  The Rangers traded Hamels to the Cubs in July.

Hamels did not pitch during any of the three games but was greeted with a video presentation by the Phillies and a standing ovation by the fans.  It was good to see Hamels again and I hope he will pitch one more time for the Phillies before his career comes to an end.