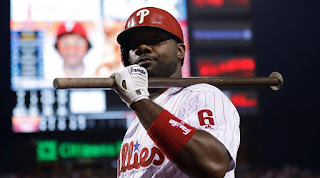 Former Phillies first baseman Ryan Howard announced his retirement from baseball yesterday (September 4th).  Howard released a statement announcing his retirement and specifically thanked Philadelphia and the fans.  Instead of summarizing his words...I will just provide the link to the Big Man's statement so you can read it yourselves.

Thank you for all the memories, Big Piece!  I look forward to Ryan Howard Day at the ballpark and your eventual addition to the Phillies Wall of Fame!