Welcome to the final Hunter Pence stat update of the season.  In case you want to catch up.....here are the previous updates:

I also want to report that Pence signed a 5-year $90 million dollar contract extension with the San Francisco Giants on Saturday.  The deal includes a full no-trade clause so Hunter will remain with the Giants for years to come.  Pence also received the Willie Mac Award last Friday (September 27th) by the Giants for being the most inspirational player on the team.

I was hoping that perhaps Pence would resign with the Phils as a free agent this off-season but since that won't be happening I will not be posting Pence's stats in 2014 or beyond.  I do plan to continue posting pictures of Hunter as a Phillie until the start of the 2014 season.  So starting next month this feature will be renamed Hunter Pence Photo(s) of the Month and will appear once a month through March 2014.

The picture that I chose for this month's Hunter Pence Photo of the Month is a cool shot of Pence swinging at a pitch.  Hope you all enjoy it. 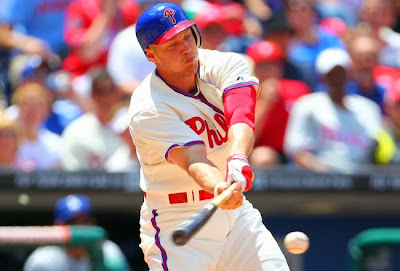