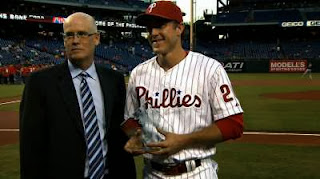 I forgot to post this last week due to my vacation.  My hero, Chase Utley was honored by the Phillies with two awards.  The first award was the Phillies' Community Outreach Award and the second award was Chase being named the Phils nominee for the Roberto Clemente Award (which is awarded during the World Series).  Both awards are a recognition of Chase's charitable work.  Congrats Chase!