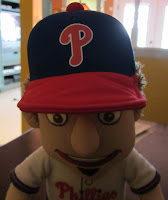 Here is the score of tonight's game:**

Carlos Ruiz gets a Home Run (4)


Very tough loss tonight.  The Phillies offense showed up and scored 13 runs but unfortunately the Braves scored 15.  The Phils blew a 6-0 lead and a 12-8 lead to lose their 13th game of the season.  The Phils are also now 0-3 in extra inning games.  Carlos Ruiz did have an amazing game at the plate. Chooch hit a three run Home Run and two doubles for seven total RBIs.  The Phils play early tomorrow....hope they can put the loss behind then and still win this series.