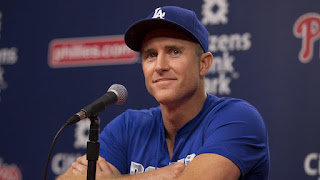 Former Phillies second baseman (and my hero) Chase Utley returns to Citizens Bank Park this week to play the final regular season games of his career in Philadelphia.  Ever since Chase announced his retirement at the end of the 2018 season (Chase Utley Announces His Retirement)....I have been a little bummed.  Even though I really hope Chase plays well this week...I still want the Phils to sweep the Dodgers.