Howie Kendrick Placed on the DL 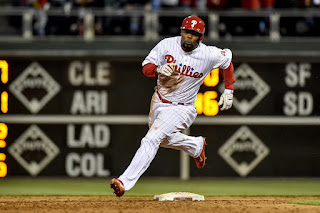 Phillies outfielder and second baseman Howie Kendrick was placed on the DL (Disabled List) with a left hamstring injury yesterday (June 30th).  Kendrick has been dealing with the injury since last week and has only been used sparingly as a pinch hitter and as the DH (Designated Hitter) in Tuesday's (June 27th) game against the Seattle Mariners.

This is Kendrick's second stint on the DL this season.  He missed about six weeks with a right abdominal strain (Kendrick 1st DL Stint 2017 Season) in April and May but is not expected to be out as long this time.

The Phillies have brought up outfielder Nick Williams from Triple A to replace Kendrick on the roster.  Williams was one of the centerpieces in the Cole Hamels trade to the Texas Rangers in 2015 (Cole Hamels Traded to Rangers) and is hoped to be a big part of the Phils future plans.