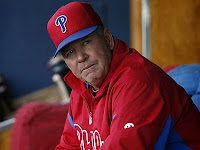 Just wanted to report that Phillies Pitching coach Rich Dubee has been let go by the team.  Dubee had been with the Phils for nine season. There is speculation that many other coaches may be let go in the coming days as Ryne Sandberg brings in his own coaches for the 2014 season.