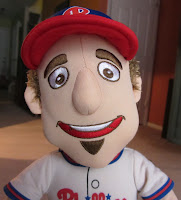 
The Phils win their fifth straight and are now one game over .500 at 20-19. Roy Halladay pitched well and got his first win in a month.  The Phils were actually ahead 8-3 in the bottom of the 9th but Jake Diekman got roughed up for four runs before Jonathan Papelbon came in for the final out.  Carlos Ruiz continues to scorch the ball with four hits and three RBIs.  Hunter Pence also had a couple of hits and two RBIs.  The Phils now head back home for the first Interleague series against the Boston Red Sox.  Go Phils!!!