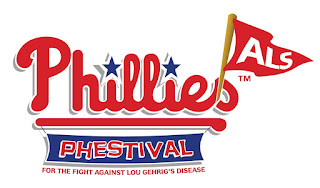 The 2017 Phillies Phestival is being held later today from 4-6PM down at the ballpark.  Proceeds from the Phestival will benefit the fight against ALS (Amyotrophic Lateral Sclerosis).  Here is a link to learn more about ALS (http://www.alsa.org/about-als/what-is-als.html).

The Phillies have been involved in the fight against ALS since 1984 so thank you to the Phillies and the fans for supporting such a great cause.