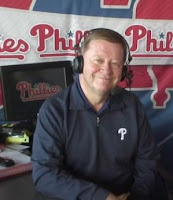 I just wanted to mention that former Phils broadcaster and goodwill ambassador Chris Wheeler has announced his retirement from the Phillies organization after 47 years of employment.  Wheeler (better known as Wheels) did broadcasting for the Phillies from 1977 to 2013 before becoming a goodwill ambassador for his final three years with the team.  Before his broadcasting career, Wheeler worked in the Phils public relations department.

I just wanted to share Wheeler's reaction to the winning call of the 2008 World Series by Harry Kalas...which was just as great as Harry's amazing call.

Good luck in all your future endeavors, Wheels!