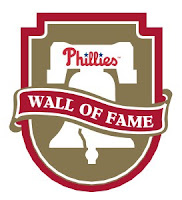 The Phillies announced on Tuesday (February 27th) that former starting pitcher Roy Halladay (who passed away last November) and former Phils GM and President Pat Gillick have been selected as the 2018 inductees to the Phillies Wall of Fame.  The ceremony will occur on Friday, August 4th before the game against the Miami Marlins.  The Phils also announced that a flag bearing Halladay's Number 34 will fly at Citizens Bank Park for the entire 2018 Season.

Halladay pitched for the Phillies from 2010-2013 and had great success with the team.  Doc was the 2010 NL Cy Young award winner and pitched two no-hitters during the 2010 Season.  The first no-hitter was a perfect game against the Marlins and the second no-hitter occurred in the NLDS playoff series against the Cincinnati Reds.


Gillick was the Phils GM during the World Series winning 2008 season and many off his moves were instrumental to the success of the Phillies during the 2007-2011 run.  Gillick was also elected to the National Baseball Hall of Fame in 2011.


I just wanted to congratulate both men for this honor.  I just wish that Doc would have been around to be a part of it.