Cesar Hernandez Placed on the DL 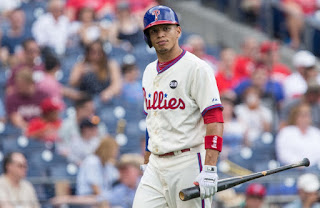 Phillies starting second baseman Cesar Hernandez was placed on the DL (Disabled List) with a strained left abdomen before yesterday's game (June 11th) against the St. Louis Cardinals.  It is unknown how long Hernandez will be out but Howie Kendrick had a similar injury to Cesar earlier this season and was on the DL for six weeks.  Hernandez says that he will not be out for that long.

Kendrick played second base in yesterday's game and it is not known if he will be the primary second baseman until Hernandez returns.