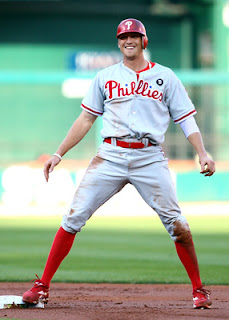 The Phils traded Hunter Pence to the San Francisco Giants for Nate Schierholtz (outfielder), Tommy Joseph (minor league catcher) and Seth Rosin (minor league pitcher).  I am really surprised that Pence was traded.  I think it was a lousy trade and a salary dump.  I would not have traded Pence...especially since Shane Victorino was already sent packing.

Pence was one of my favorite Phils. Even though he was only here for one year, I am going to miss him.  I really don't like the Giants but I do wish him luck.