Phillies Hall and Wall of Famer Jim Bunning Has Passed Away 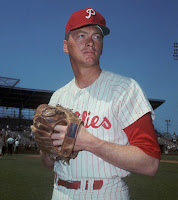 Bunning is the first player to pitch a no-hitter in both the American and National Leagues.  His no-hitter as a Phillie was a perfect-game on June 21, 1964.


After his baseball career ended, Bunning served first in Congressman and then as a Senator from Kentucky.  Rest in peace, Senator Bunning.