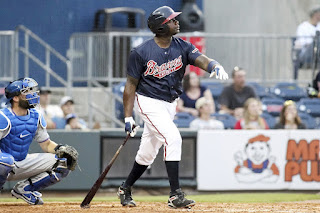 Former Phillies first baseman Ryan Howard was released by the Atlanta Braves yesterday (May 8th).  Howard signed with the Braves early last month (Ryan Howard Signs With The Atlanta Braves) and played in their minor league system but was not very effective against minor league pitching.  It is uncertain if the Big Piece will catch on with another team but I do wish him luck.  If his career is over...I hope to see him retire as a Phillie.