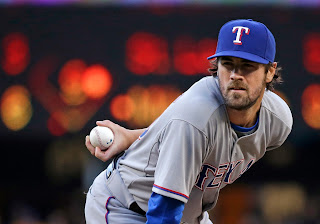 The Phillies are in Texas to play the Rangers tonight and will see former Phils pitcher Cole Hamels for the first time since he was traded in July 2015.  Unfortunately Hamels is injured (out eight weeks with a strained oblique muscle) and will be unable to pitch in the series.  It will still be good to see Hamels in the dugout but I would have liked to see him pitch against the Phils.