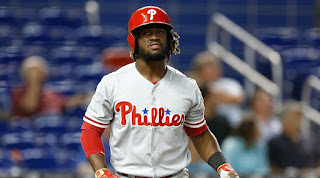 Phillies center fielder Odubel Herrera was suspended by Major League Baseball for the rest of the 2019 Season on Friday (July 5th) because he violated baseball's domestic violence policies (Phillies Statement On Odubel Herrera).  The suspension is without pay and includes and potential postseason games that the Phillies may be in.  Herrera will not appeal the decision.

The Phillies issued the following statement after the suspension was issued:

The Phillies fully support the decision by the Commissioner’s Office to suspend Odúbel Herrera for violating MLB’s Joint Domestic Violence Policy. All instances of domestic violence and abuse are abhorrent and unacceptable, and we unequivocally support Baseball's collective efforts to prevent domestic abuse. We are encouraged by Odúbel’s acceptance of his discipline as an indication of his willingness to learn from this and change his behavior appropriately.

Herrera will be eligible to return to the Phils next season but I would be surprised if he ever returns.  I suspect that he will be either traded or released in the offseason.