My Appearance on NBC Sports Philadelphia 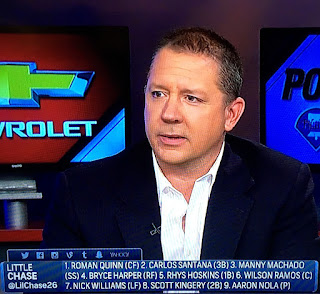 I just wanted to thank NBC Sports Philadelphia for my appearance yesterday during Phillies Postgame Live.  During the show, hosts Danny Pommells and Ricky Bottalico asked the fans to submit their 2019 Phillies Opening Day Starting Lineup via Twitter.  As Pommells and Ricky Bo were discussing their lineups...my lineup appeared at the bottom of the screen.  Here is the dream lineup that I tweeted:

I guess we shall see if the Phils can make my dream lineup come true.  They will have to spend some money to do it and I hope they do.  Thank again for the appearance, NBC Sports Philly!