The Phillies have officially released first baseman Ryan Howard yesterday when they declined his 2017 club option on his contract.  The Phils will instead pay Howard $10 million dollars and he becomes a free agent.

This move is no surprise since the Phils had a big ceremony honoring the Big Piece before the final game of the season last month (Ryan Howard Honored by the Phillies and the Fans on the Last Day of the 2016 Season) but it is still a sad day.  Howard was the last Phillie from the 2008 World Series team as well as era of success from 2007-2011.  Good luck wherever you end up Big Piece.  I'll be rooting for you and you will always be a Phille to me. 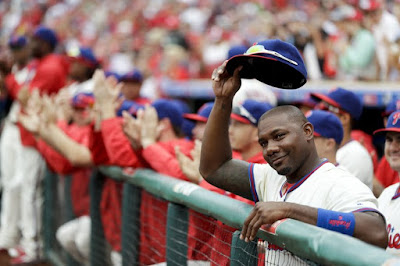