Phillies first baseman Ryan Howard was honored before Wednesday night's (September 21st) game against the Chicago White Sox when he received his trophy for being the Phillies 2016 nominee for the Roberto Clemente Award.  The Roberto Clemente Award is given to the winner during the World Series and is presented to the player who best represents the game of baseball both on the field with sportsmanship and off the field with charitable work.

The Big Piece was named the nominee in early September (Ryan Howard Named Phillies 2016 Nominee for Roberto Clemente Award) and is the second straight year that Howard has been named the Phillies nominee.  You can help the Big Man win by tweeting #VoteHoward.  Congrats again, Big Piece! 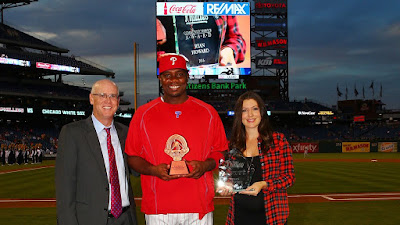