Domonic Brown Has Concussion and is Likely Done for the Season 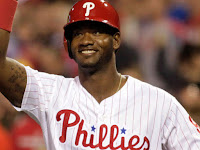 Phillies outtfielder Domonic Brown suffered a concussion on September 2nd and is likely out for the rest of the season.  His time in Philly may also be up as he will probably not return to the Phillies next season.

Dom suffered the injury when he tumbled over the outfield wall during the game against the New York Mets.  I wish Dom a speedy recovery and if he has played his last game as a Phillie...good luck in the future.