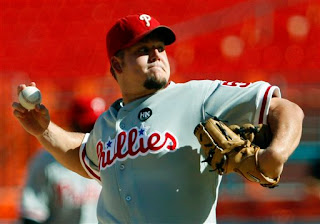 Yesterday the Phils traded pitcher Joe Blanton to the Los Angeles Dodgers in a waiver deal for a player to be named later or cash considerations. Blanton has been with the Phils since August 2008 and was part of the World Series team that year.  I wish Blanton all the luck with the Dodgers and thanks for the memories.