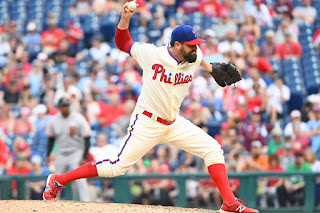 I just wanted to congratulate Phillies relief pitcher Pat Neshek for his selection to the 2017 National League All-Star Team.  This is Neshek's second All-Star appearance as he was also on the 2014 NL Team while a member of the St. Louis Cardinals.  The All-Star Game will be played next Tuesday night (July 11th).  Congrats again, Pat Neshek!