Phils Having Ceremony To Honor Ryan Howard On Sunday 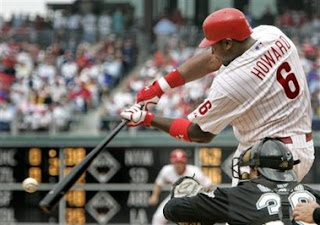 Phils first baseman Ryan Howard is being honored in a pre-game ceremony before the last game of the season this Sunday (October 2nd)...which will likely be Howard's last game as a member of the Phillies.

Howard has played for the Phillies for his entire career and was one of the cornerstones of the 2007-2011 run of five straight NL East division titles, two National League championships (2008-2009) and the World Series title (2008).  Phils skipper Pete Mackanin says that he plans the play the Big Piece in all three of the remaining games of the season.