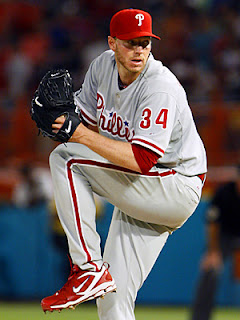 Just wanted to give you a quick update on the status of Phils pitcher Roy Halladay.  Doc met with reporters efore today's Phillies game and stated that both his surgery and rehab having been going well.  He also said that he hopes to return to the Phils and pitch before the end of the season.

I hope that this is true.  The Phils could use Doc toward the end of the season...especially if they are in the middle of a playoff hunt.  If he looks good, the Phils may also decide to resign him next season on a team friendly deal.  Get well, Doc and I am looking forward to seeing you pitch in Citizens Bank Park both this year and hopefully next.