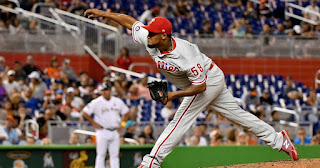 The Phillies traded relief pitcher Juan Nicasio to the St. Louis Cardinals yesterday (September 6th) for Minor League infield prospect Eliezer Alvarez.  Nicasio had only been with the Phils for five days after they claimed him off waivers from the Pittsburgh Pirates (Phillies Claim Pirates Relief Pitcher).  Nicasio pitched twice for the Phils during those five days and won one game.