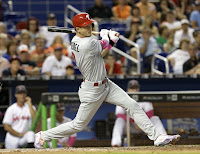 Phillies outfielder Tyler Goeddel was injured in Wednesday night's (September 21st) game against the Chicago White Sox.  Phillies skipper Pete Mackanin announced yesterday that Goeddel sustained a concussion when he was hit by a pitch in his helmet while batting in the sixth inning.  With only nine games remaining in the season...it is unlikely that Goeddel will play again this year.