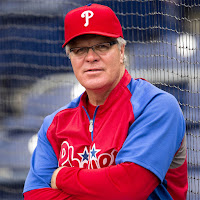 Phillies interim manager Pete Mackanin has been named the Phils skipper for the 2016 season with an option for the 2017 season. Mackanin has a record of 30-46 since taking over for Ryne Sandberg on June 26th but since the All-Star break the record has been 27-32.  Mackanin is popular with the young players and the team has played with more energy since he has taken the reigns. I want to congratulate Pete Mackanin and wish him the best of luck for the remainder of this year and the 2016 season.